WELCOME TO HIGH COMMISSION OF GHANA
The High Commission of the Republic of Ghana is located in New Delhi at 50-N Satya Marg, Chanakyapuri. The High Commission is a one-stop reference point for general information on Ghana, including information on the broad economic and business environment procedures for undertaking imports from and exports to Ghana investment opportunities, incentives and relief available in Ghana tourism destinations official Government of Ghana policies and visa and consular services.
Previous
Next

Emergency Alert In an emergency, please contact the Ghana High Commission or Honorary Consul or call the following numbers for any assistant:
MR. EDDISON AGBENYAGAH: +91 730 355 5029
HEAD OF CHANCERY 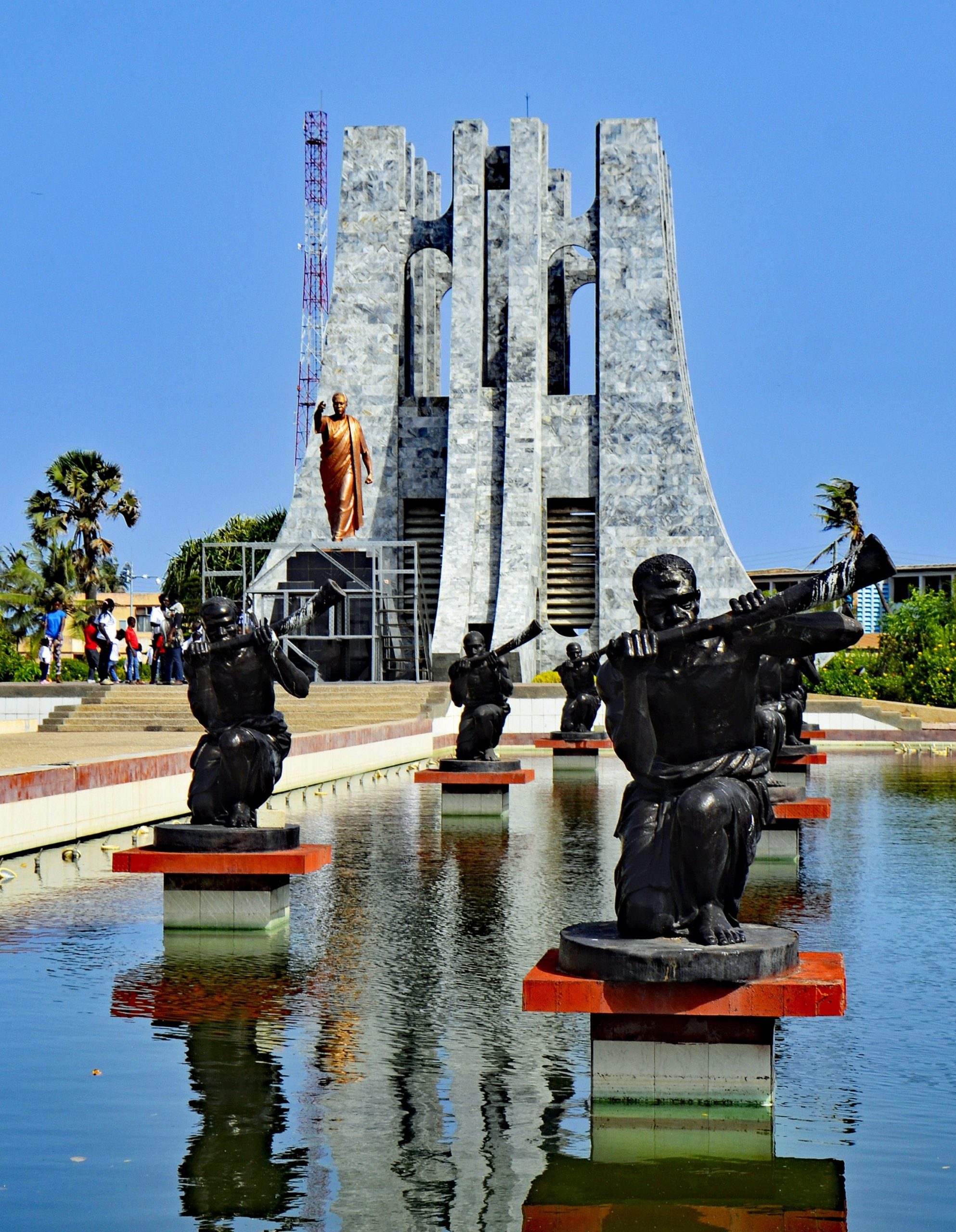 The High Commission is a one stop reference point for general information on Ghana, including information on the broad economic and business environment  procedures for undertaking imports from and exports to Ghana investment opportunities, incentives and relief available in Ghana tourism destinations official Government of Ghana policies and visa and consular services. The High Commission of the Republic of Ghana is concurrently accredited to Bangladesh, Maldives and Sri Lanka.

INVEST IN GHANA
a
a 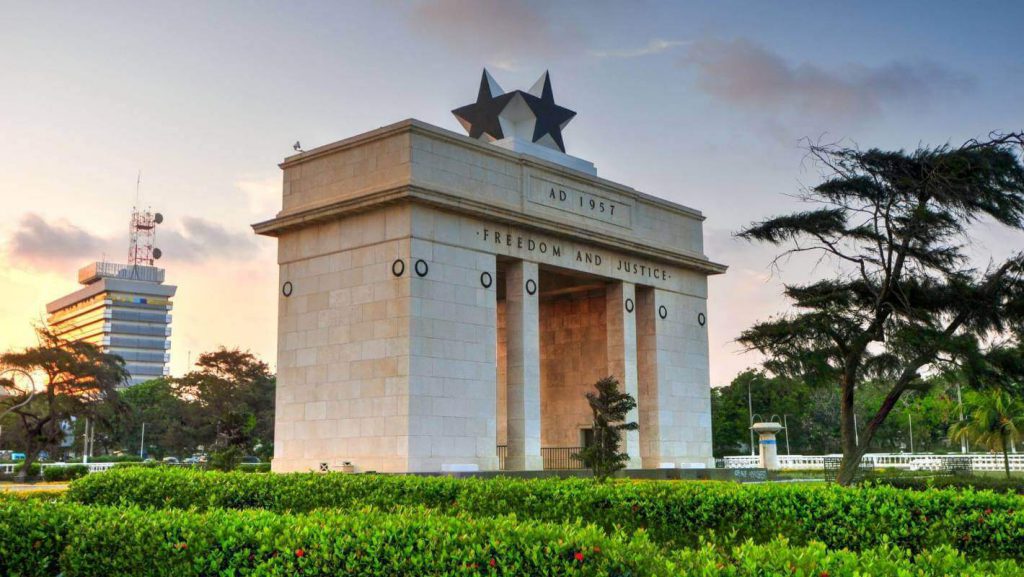 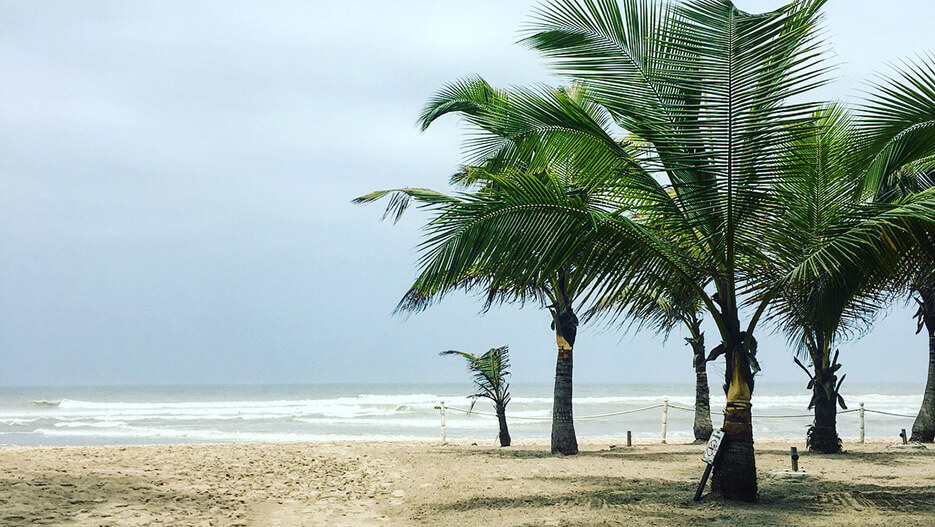 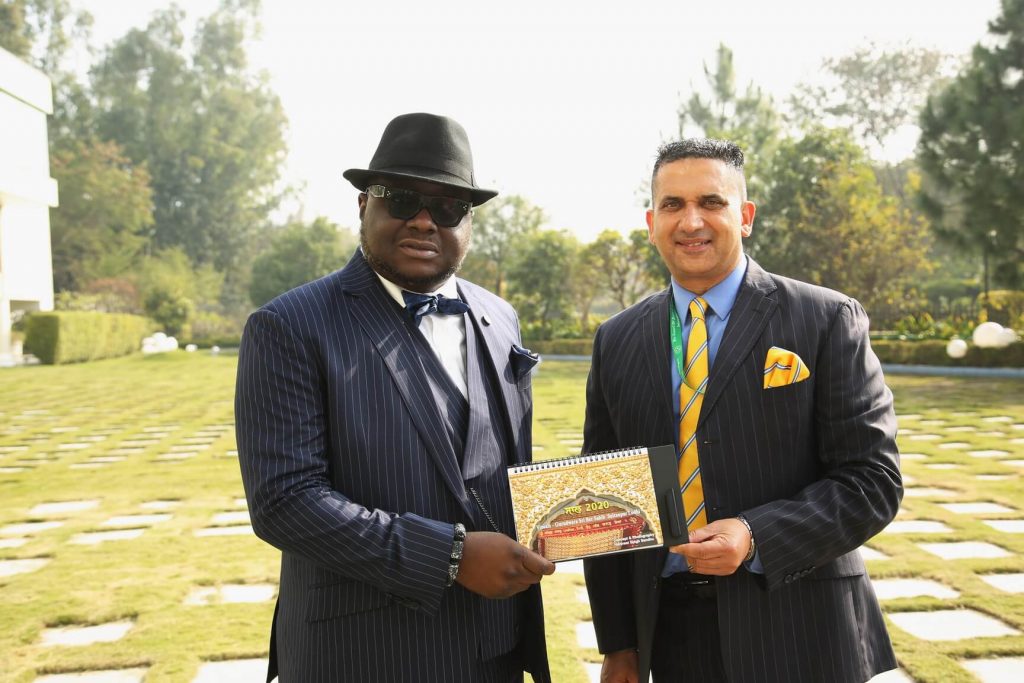 READ MORE
The Ghana High Commissioner Speaks at the International Conference of Members of the Bar, 2020, Punjab - India 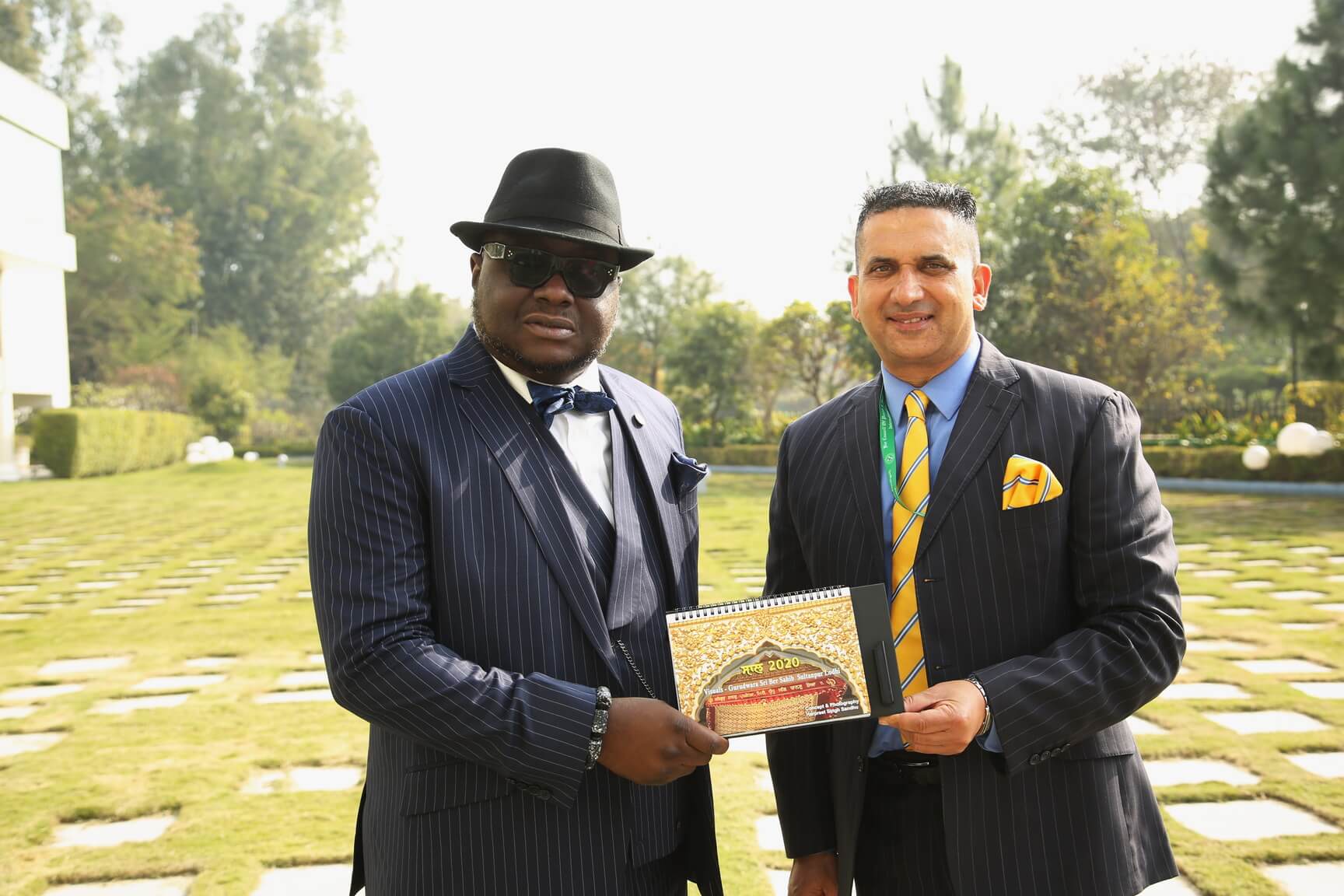 The Ghana High Commissioner Speaks at the International Conference of Members of the Bar, 2020, Punjab - India
Mr. Harpreet Brar, Chairman of the Bar Council of Punjab and Haryana and Mr. Harpreet Sandhu, senior member, welcomed H.E. Dr. Michael Aaron Nii Nortey Yaw Oquaye, Esq. as their Special Guest of Honor to a two-day International Conference at Punjab University, Chandigarh, to honor the 550th birth anniversary of Shri Guru Nanak Dev Ji, the founder of Sikhism in India. The conference was inaugurated by Honorable Justice Shri Sharad Arvind Bobde, Chief Justice of India.
Present at the occasion were dignitaries from around the world with speakers including the Honorable Justice Surya Kant, Judge, Supreme Court of India; Honorable Justice P.P. Surasena, Judge, Supreme Court of Sri Lanka; Honorable Justice Rinzin Penjor, Judge, Supreme Court of Bhutan; Honorable Justice Ravi Shanker Jha, Chief Justice, High Court of Punjab and Haryana; Hon'ble Justice Cheema Grubb, Judge, Royal Court of Justice of England and Wales; Mr. Manan Kumar Mishra, Chairman Bar Council of India; among others.
Ghana's High Commissioner H.E. Dr. Michael Oquaye, Esq in his remark, greeted the members of the Bar, and the Legal Fraternity, and expressed his excitement to be part of the 'family' recounting his experiences as a practicing lawyer before he became the High Commissioner of Ghana to India. He also expressed his gratitude to be part of Shri Guru Nanak Dev Ji's extensive philosophy, which is based on the Rule of Law.
"We are here to talk about peace, social justice, equity, and the environment," he said. These are the exact tenants of the man who foundered Sikhism Shri Guru Nanak Dev Ji.
Shri Guru Nanak Dev Ji is known for his political, social, and spiritual beliefs, which are based on love, equality, fraternity, and virtue. He traveled to far off places to spread the message of 'one God' and that God constitutes the eternal truth, and he resides in his creations.
H.E. Dr. Michael Aaron Oquaye, Esq. urged the audience to practice equality and social justice in all aspects of their lives. Those are the teachings of Shri Guru Nanak Ji, he said. He urged the leaders of the conference and young people to walk and talk the talk of Shri Guru Nanak Dev Ji to make this world a more reliable and more satisfying place. "We must forget our differences in religious doctrine and racism build up each other in love and harmony. He also advocated respect for women, which is one of the teachings of the Guru.
The High Commissioner went on to say that Africa, the second-largest continent, plays a pivotal role in every sense, and the conference wouldn't be truly represented and international without the presence of Africa and particularly Ghana.
H.E. Dr. Michael Aaron Nii Nortey Oquaye, Esq took the opportunity to present Honorable Justice Shri Sharad Arvind Bobde, Chief Justice of India and other dignitaries, mementos from Ghana.
The Ghana High Commissioner was accompanied by Mr. Yaw Kwakye. 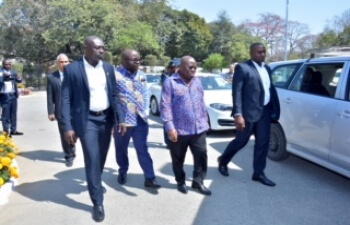 READ MORE
The President of the Republic of Ghana to attend the Founding Conference of ISA.

On the Occasion of the visit of His Excellency Nana Addo Dankwa Akufo Addo, President of the Republic of Ghana to attend the Founding Conference of the International Solar Alliance (ISA), Sunday 11th March, 2018. (THE ISA FRAMEWORK AGREEMENT WAS RATIFIED BY GHANA UNDER HIS LEADERSHIP AS THE PRESIDENT OF GHANA ON 3RD OCTOBER 2017) 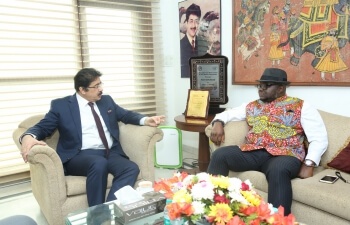 READ MORE
The Indo-Ghana Film and Cultural Forum was launched in Noida, India.

The Indo-Ghana Film and Cultural Forum was launched in Noida, India on 5th December, 2017. The programme was organized by the International Chamber of Media and Entertainment Industry (ICMEI) of India and the Film City, Noida. The High Commissioner of Ghana, H.E. Mike A.N.N. Oquaye was the Guest of Honour for the occasion. The programme was attended by the founder of Film City, Noida, Mr. Sandeep Marwah, Secretary-General of ICMEI, official from the Asian Academy of Film and Television and representatives from the media houses.

Mr. Sandeep Marwah, stated that the purpose of launching the forum was to enhance and improve cooperation between India and Ghana especially in the arts and cultural industry. He commented that the Ghana Film Industry was a leading and one of the biggest in Africa in the 1990s. Unfortunately, it experienced some challenges. He expressed the hope that the Indo-Ghana Film and Cultural Forum would therefore help to revamp the Ghana Film Industry.

On my part, the High Commissioner of Ghana, H.E. Mike A.N.N. Oquaye commended the efforts of the organizers for the laudable collaboration between Ghana Film Industry and India Film Industry, Bollywood, was the largest film industry in the world (in terms of volumes). He noted that the Ghana Film Industry used to be very big in West Africa but it had been overshadowed by Nigeria due to several military interventions and its related curfews which normally disrupted live showbiz programmes and cinema.

In addition, H.E. Mike Oquaye pointed out that the cooperation between our two industries should not lead to an influx of Indian films in the Ghanaian market. Rather, it should be a collaboration whereby Ghana could learn from the Indian experience, share and exchange ideas and ultimately enhancing the Ghana film Industry. He emphasized that the collaboration must lead to a situation where India film would choose Ghana as a film location in order to create numerous jobs for the Ghanaian artisans.

In conclusion, H.E. Mike Oquaye reiterated that this was a laudable first step engagement to advance relations between Ghana and India in terms of film and film education. However, he indicated that the most important step was to arrange a trip for officials of ICMEI to visit Ghana to engage the relevant film federations in Ghana as well as the Secretariat of Arts and Culture under the guidance of the Minister of Tourism. He promised to facilitate this land mark engagement in early next year.

H.E. Mike Oquaye was made a patron of the Indo-Ghana Film and Cultural Forum, whilst Mr. Sandeep Marwah was made the honorary chairperson. The High Commissioner then granted radio and television interviews on Ghana and India relations.

Minister / Head of Chancery a


First Secretary/Trade, Culture and Tourism
a

Third Secretary / Accounts
a
a

The Ghana High Commissioner Speaks at the International Conference of Members of the Bar, 2020, Punjab - India